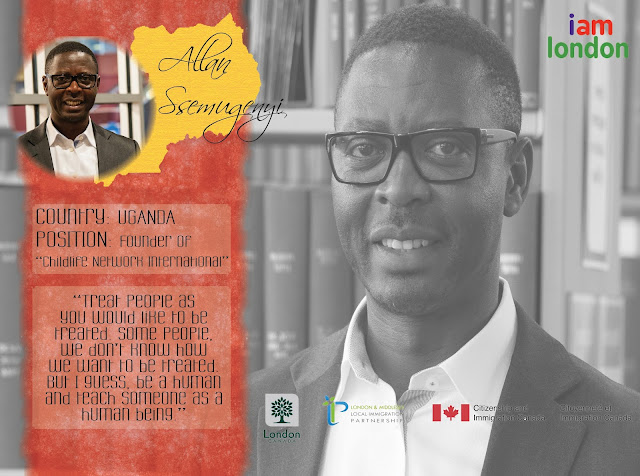 Allan moved to Canada in 2002.  The story of how he came from Uganda to London is a long one.  Before he and his wife left Uganda, the person who was helping them to leave the country, was a Canadian, by the same name, Allan. They first landed in Washington, DC and then ended up in Boston.  Then a lady from Chatham Ontario helped them to settle in London.  Before they took the bus to Canada, she set up places where they could stay overnight in Montreal and Toronto. She also had a friend here in London, who was moving and had a lease Allan and his wife could take over so they could live there for 3 months.

Once they got here, Allan realized he loved London.  He came from a very small town in Uganda. “So coming from a small place, Toronto was too big for me, but London was a good size.  London is a small town, it has a little bit of community and we were fortunate that the people welcomed us with open arms. I think that was part of us staying here. People we met are friendly”.  His challenge is the language, but he is learning to overcome the challenge through socialization with other people who speak English. Learning the language is learning the culture. “The London community has given so much to us. When we were traumatized from 3 wars in Uganda, you don’t realize you live all of your life you live in fear. You don’t realize until you come here you feel the peace.”

Allan faced many hardships growing up in Uganda including poverty and war.  For that reason, he is very involved in the community of London particularly in organizations that help children. He started volunteering at the Children’s Aid Society and other children’s organizations.  Shortly after moving here, they started going to Church and volunteered with young people in the church community as well. In 2006, Allan founded an organization called Childlife Network International whose mission is “to heal and empower African children who have been impacted by HIV/AIDS, war, and abuse, through care, guidance, and education.”


Allan’s advice to Londoner’s is to great people and recognize them as fellow human beings, as this brings about healing because they may be coming from a place where their life isn’t valued.  “Treat people as people. Treat people as you would like to be treated. Some people, we don’t know how we want to be treated. But I guess, be a human and teach someone as a human being. In Uganda, there is a symbol which says we are connected, I am because you are. The thing is we are connected, if I treat you properly like I treat myself, we can connect. We can build a great city here. It doesn’t matter where they’re from. It doesn’t matter if someone is down on the floor or up at City Hall, that if we treat them as human beings, we emphasize our whole community. It doesn’t matter where someone comes from.”

Listen to the Podcast!

I am London Tweets